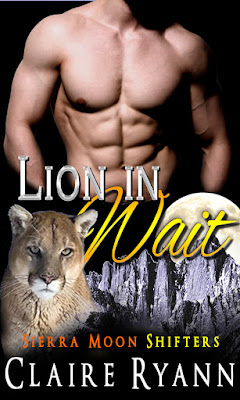 So what's the story with that mountain lion, anyway?

Well, the cougar from the first Sierra Moon books is finally telling his own story in this new release.

Lion in Wait is a complete story with NO cliff hanger ending! It can be read by itself but, of course, it'll make so much more sense if you're up to date with the first three books in the series.

GET IT ON AMAZON!


And, like all the titles in the Sierra Moon Shifters series, Lion in Wait can be read for free by Kindle Unlimited subscribers!

The injustice of the whole miserable circumstance hit him. The last thing he would ever want for Becka would be to pass this curse on to her.

Travis was looking forward to meeting that special someone. Settling down, raising a family, and living happily ever after. Some day.

A short fling before starting out on a late season hike leaves him with a nasty bite scar and some pretty vivid dreams. By the time he comes to terms with the fact that he's not dreaming, he's already made enemies of the only other shifters he knows about-- a pack of wolves secretly living in the Sierra Nevada mountains.

When he meets a friendly bear shifter who fills in some of the blanks on what's happening to him, Travis resigns himself to a life alone: Mountain Lions are notorious for their one night stand behavior and he's determined not to pass along his shifter curse.

Naturally this would be when he finds the one woman he sees himself spending his life with, a forest ranger exiled to a tiny cabin for a winter job of recording snow pack for the season.

He can't stay with her, can't give in to the new instincts within him that scream to Turn her and take her as his mate. Can't risk doing that to her knowing that the cougar roaring within him is bound by a nature that will only force him to move on once he's spread his seed. Leaving her to deal with this burden alone...

Posted by Claire Ryann at 2:56 PM No comments:

I cannot believe how many people have signed up to be included on my regular mailing list and ARC list! It's so exciting to hear from the actual people who are reading my books and get such great feedback on my work-- very encouraging.


I don't currently have the option of sending automated responses each time someone subscribes to the list. So I try to manually send out responses every other day or so.

Which is great, really. I'm very excited about the success of the list.

Meanwhile-- I am terrible with Twitter. So if you follow me there, don't be surprised if I never re-Tweet, forget all my hashtags, and ignore direct messages. The place is a mystery to me.

Facebook, however, works just fine-- most of the time. I now have an official author page that needs likes. I don't check FB every day, but it's on my regular route that I make through the Internet when I'm procrastinating writing. Check it out.

Oh...and I have an author page on Goodreads too! Which I need to add to that list of places to waste time when I'm not writing.
Posted by Claire Ryann at 2:42 PM No comments:

Travis's story is taking longer to tell than I'd expected.

I was on a schedule, dangit! And now I'm wasting time with a short blog update instead of making sure my heroine doesn't freeze to death!


Posted by Claire Ryann at 5:20 PM No comments: